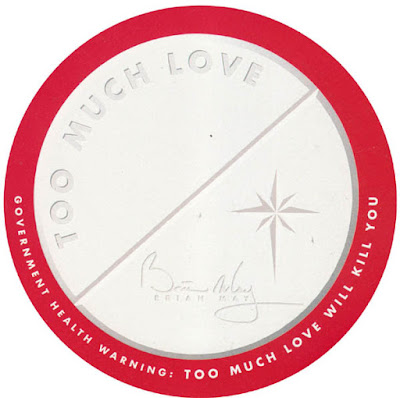 "Too Much Love Will Kill You" is a song written by British guitarist Brian May of Queen, Frank Musker, and Elizabeth Lamers. The song reflected the breakdown of May's first marriage and attraction to his future wife, Anita Dobson. It was first recorded by Queen around 1988 or before, and was intended to be on the band's The Miracle album in 1989, but did not make the cut due to legal disputes following the band's decision that all songs on the album would be written by the group as opposed to individuals. After Freddie Mercury's death in 1991, May arranged a solo version, which he performed at the Freddie Mercury Tribute Concert in 1992, and subsequently included on his solo album Back to the Light that same year. Released as a single, it reached No. 5 on the UK Singles Chart. Because it was first played publicly at The Freddie Mercury Tribute Concert, a common misconception is that it was written as a tribute to Freddie Mercury, although it had actually been written several years before he died.

Email ThisBlogThis!Share to TwitterShare to FacebookShare to Pinterest
Labels: Brian May