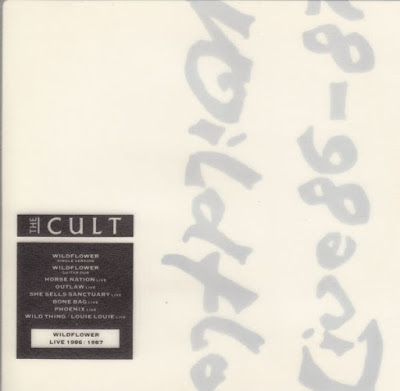 "Wild Flower" is a single of the "Electric" album it charted at #24 in the UK and #69 in Australia. With 8 tracks this release was closer to an album than an EP. The Cult are a British rock band formed in 1983. Before settling on their current name in January 1984, the band performed under the name Death Cult, which was an evolution of the name of lead singer Ian Astbury's previous band Southern Death Cult. They gained a dedicated following in the UK in the mid-1980s as a post-punk/gothic rock band, with singles such as "She Sells Sanctuary", before breaking mainstream in the United States in the late 1980s as a hard rock band with singles such as "Love Removal Machine" and "Fire Woman".

Email ThisBlogThis!Share to TwitterShare to FacebookShare to Pinterest
Labels: Cult