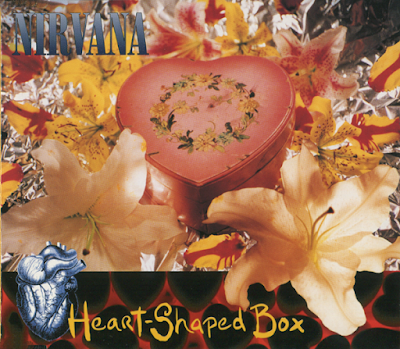 "Heart-Shaped Box" is a song by American rock band Nirvana, written by vocalist and guitarist Kurt Cobain. The song was released as the first single from the group's third and final studio album, In Utero, in 1993. It was one of two songs from the album mixed by Scott Litt in order to augment the original production by producer Steve Albini. While Nirvana's label DGC Records did not release a physical single for sale in the United States, "Heart-Shaped Box" received much American radio airplay, reaching number one on the Billboard Modern Rock Tracks chart. The international release of the single reached number five on the UK Singles Chart and #21 on the Australian charts.

Email ThisBlogThis!Share to TwitterShare to FacebookShare to Pinterest
Labels: Nirvana