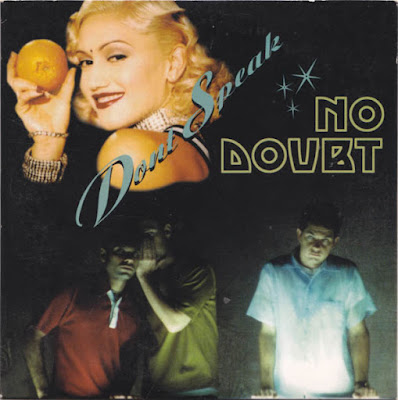 "Don't Speak" is a song by the American rock band No Doubt. It was released in 1996 as the third single from the band's third studio album, Tragic Kingdom (1995). Vocalist Gwen Stefani wrote the song with her brother Eric Stefani about her bandmate and ex-boyfriend Tony Kanal shortly after he ended their seven-year relationship.

Despite the song's popularity, "Don't Speak" did not chart on the Billboard Hot 100 (as rules of the times required commercial singles for charting and one was not issued for the song), but it did reach number one on the Billboard Hot 100 Airplay for 16 weeks. The single also reached number one in Australia, Canada, the Netherlands, New Zealand, and the United Kingdom, being No Doubt's most successful international single. "Don't Speak" was nominated for Song of the Year and Best Pop Performance by a Duo or Group with Vocals at the 1998 Grammy Awards.