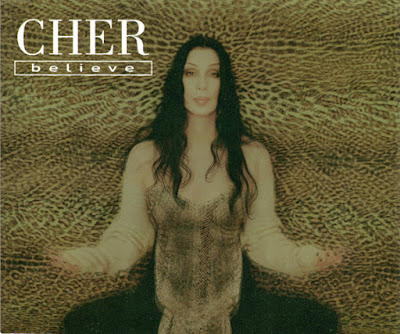 "Believe" is a song recorded by American singer-actress Cher. It is the title track from her twenty-second album of the same name (1998), and was released as the lead single from the album on October 19, 1998 by Warner Bros. Records.  Commercially, the song attained immense global success, reaching number one in almost every country it charted, including Australia, Canada, Ireland, New Zealand, the United Kingdom, Spain, France, Germany, Italy and the United States. It earned Cher a place in the Guinness Book of World Records as the oldest female solo artist to top the Billboard Hot 100 chart. It also became the highest-selling single by a solo female artist in the United Kingdom. "Believe" remains one of the best-selling singles of all time with sales of over 11 million copies worldwide.

Email ThisBlogThis!Share to TwitterShare to FacebookShare to Pinterest
Labels: Cher