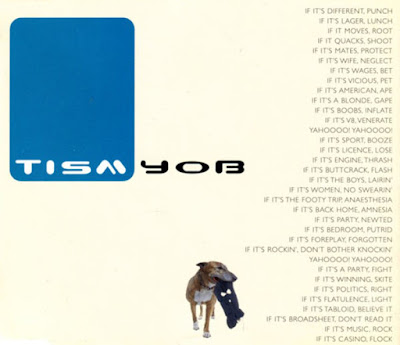 TISM (an acronym of This Is Serious Mum) were a seven-piece anonymous alternative rock band from Melbourne, Australia. The group were formed on 30 December 1982 by vocalist/drummer Humphrey B. Flaubert, bassist/vocalist Jock Cheese and keyboardist/vocalist Eugene de la Hot Croix Bun, and enjoyed a large underground/independent following. Their third album, Machiavelli and the Four Seasons, reached the Australian national top 10 in 1995.

One of the main themes on the album wanker.com is the differences between the cultures of male society, the Yobs and the Wankers. The first single from the album, Yob, describes the role of the Yob; however, this single distinctly marks the territorial bounds between the two classes of men. Throughout the song it is revealed that the Yob is the basic equivalent of the American redneck and the Wanker is the more intellectual member of society, one who looks down upon the Yob.

Email ThisBlogThis!Share to TwitterShare to FacebookShare to Pinterest
Labels: TISM