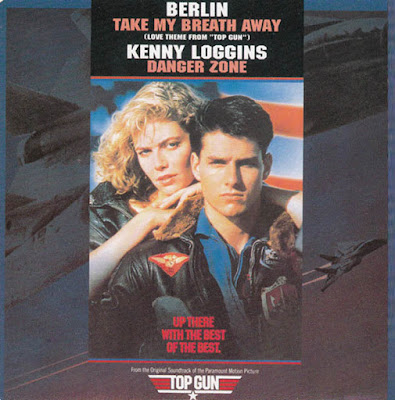 "Take My Breath Away" is a song written by Italian DJ Giorgio Moroder and Tom Whitlock for the film Top Gun, performed by the band Berlin. It won the Academy Award for Best Original Song, as well as the Golden Globe Award for Best Original Song in 1986.
"Danger Zone" is a song, with music composed by Giorgio Moroder and lyrics written by Tom Whitlock, which American singer-songwriter Kenny Loggins recorded and released in 1986. The song was one of the hit singles from the soundtrack to the 1986 American motion picture Top Gun, the best selling soundtrack of 1986 and one of the best selling of all time
. Miami Sound Machine are an American band of Latin-influenced music featuring the vocals of Cuban-born recording artist Gloria Fajardo García (later Gloria Estefan). The band was established in 1975 originally as Miami Latin Boys by Emilio Estefan Jr. and became very successful after joining with Gloria Fajardo (Estefan) in 1977. Hot Summer Nights" recorded for the Top Gun soundtrack, released as a single in the Netherlands in 1986.