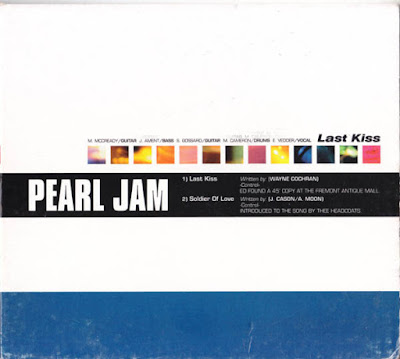 The idea to cover "Last Kiss" came about after vocalist Eddie Vedder found an old record of the song at the Fremont Antique Mall in Seattle, Washington. He convinced the rest of the band to try out the song and it was performed a few times on the band's 1998 tour. The band eventually recorded the song at a soundcheck at the Merriweather Post Pavilion in Columbia, Maryland on September 18, 1998, and released it as a 1998 fan club Christmas single. The band spent only a couple of thousand dollars mixing the song. Bassist Jeff Ament said, "It was the most minimalist recording we've ever done."
Release and reception

In the following year the cover of "Last Kiss" began to be played by radio stations and was ultimately put into heavy rotation across the US. By popular demand the cover was released to the public as a single on June 8, 1999, with the proceeds going to the aid of refugees of the Kosovo War. The cover also was featured on the 1999 charity compilation album, No Boundaries: A Benefit for the Kosovar Refugees. The song helped earn about $10 million for Kosovo relief.

Outside the United States, the single was released commercially in Australia, Austria, Japan, Mexico, South Africa and the United Kingdom. In Canada, the song reached No. 2 on the Canadian Top Singles chart and became the band's highest charted song in Canada, and later it charted on the Canadian Rock Top 30 chart, where it reached No. 4 and stayed there for two weeks. The song also reached No. 22 on the Canadian Year End Rock Top 50. "Last Kiss" reached the top 50 in the UK and the top 80 in the Netherlands. In Australia, "Last Kiss" peaked atop the ARIA Singles Chart for seven weeks, as well as becoming a moderate top 20 success in New Zealand.