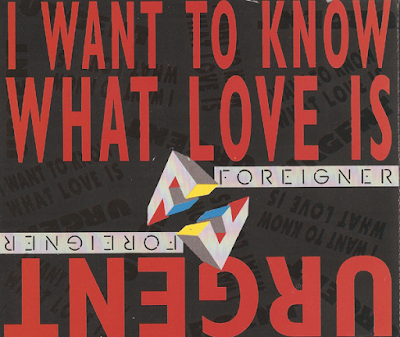 "I Want to Know What Love Is" is a power ballad by the British-American rock band Foreigner. It was released in November 1984 as the lead single from their fifth album, Agent Provocateur. The song hit number one in both the United Kingdom and the United States and is the group's biggest hit to date the song also made it to number one in Australia. It remains one of the band's best-known songs and most enduring radio hits, charting in the top 25 in 2000, 2001, and 2002 on the Billboard Hot Adult Contemporary Recurrents chart. "I Want to Know What Love Is" has continued to garner critical acclaim, and is listed as one of Rolling Stone Magazine's greatest songs of all time at #479.[3] The song is also featured in a number of films.

Email ThisBlogThis!Share to TwitterShare to FacebookShare to Pinterest
Labels: Foreigner