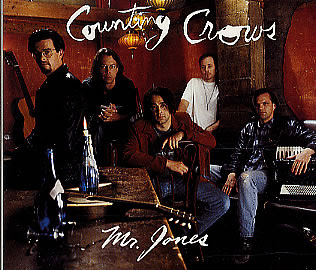 Mr. Jones" is a song by American alternative rock band Counting Crows. It was released in December 1993 as the lead single and third track from their debut album, August and Everything After (1993). It was the band's first radio hit and one of their most popular singles. "Mr. Jones" entered the American Top 40 on February 19, 1994, and entered the Top 10 five weeks later. On April 23, "Mr. Jones" passed R. Kelly's "Bump n' Grind", taking the number-one position (which it surrendered, the following week, to Prince's "The Most Beautiful Girl in the World"