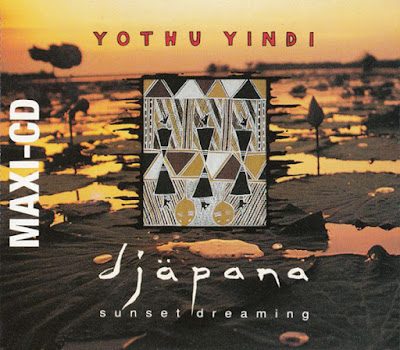 Written by Mandawuy Yunupingu. Produced by Mark McGuire. String arrangement by Stuart Wood. Australian band, made up mostly of Indiginous persons from Australia’s Northern Territory and led by the writer here, Mandawuy Yunupingu. The group’s success on the music charts began when a re-mix of the single “Treaty” (written by Paul Kelly, Mandawuy Yunupingu and other members of the group) reached # 11. The album, “Tribal Voice” produced by Mark Moffat for Mushroom Records reached #4 on the Australian album chart. "Djäpana (Sunset Dreaming)" from the album peaked at #13 in 1992 and was featured in the Yahoo Serious film, “Reckless Kelly” in 1993.