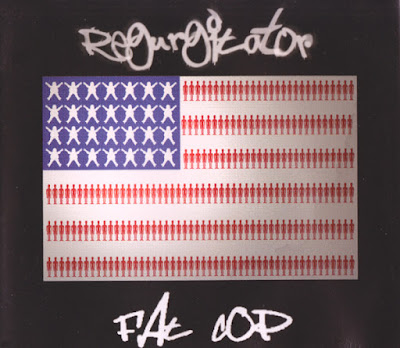 Regurgitator are an Australian rock band from Brisbane, formed in late 1993 by Quan Yeomans on lead vocals, guitar and keyboards; Ben Ely on bass guitar, keyboards and vocals; and Martin Lee on drums. Eduardo and Rodriguez Wage War on T-Wrecks is the fourth album from the Australian rock band, Regurgitator. It was released in 2001, and the singles "Fat Cop" and "Superstraight" received heavy rotation on national radio station Triple J, both songs making it into the radio stations Hottest 100 for 2001 ("Superstraight" reaching No. 41 and "Fat Cop" No. 27). Many of the tracks, notably the single "Fat Cop", were a return to the hip-hop or rap rock sound found on Tu-plang and a departure from the pop rock style on albums such as Unit.

Email ThisBlogThis!Share to TwitterShare to FacebookShare to Pinterest
Labels: Regurgitator