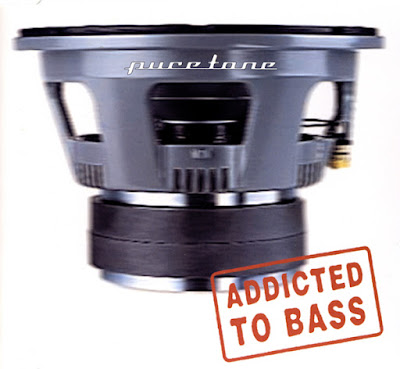 "Addicted to Bass" is a song by Puretone and Amiel Daemion, featuring Daemion on vocals. It reached the top 20 in the Australian charts in 1998. It originally appeared on Abrahams' 1998 album Sweet Distorted Holiday, and was featured again on the 2002 album Stuck in a Groove—credited to Abrahams' alias Puretone. The original release reached number 15 in Australia and number 27 in New Zealand while the 2002 release reached number two on the UK Singles Chart and number one on the US Dance Club Songs charts.

In 2015, the song was listed at number 14 in In the Mix's '100 Greatest Australian Dance Tracks of All Time' with Nick Jarvis saying "With its memorable, sing-along vocals, nudge-wink drug references and – best of all – that monstrous pre-dubstep bassline paired with scattershot jungle breakbeats, it was a perfect fusion of radio-friendly pop smarts and club madness".

Email ThisBlogThis!Share to TwitterShare to FacebookShare to Pinterest
Labels: Puretone