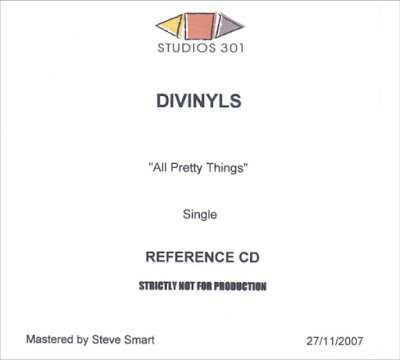 "All Pretty Things", released on a compilation album for the Homebake Festival. Amphlett stated that the band would return to the studio to record a full album provided they "survived" their Homebake headline gig and national tour.

Now this post is special! It has been ripped from the CD Master. Yep - I'm not joking. Found both the Master and Reference CD at the market last weekend and got 'em for $1 a piece. They have the Studio 301 logos embosed on the CD and covers and include Recording Documentation (scans included here) with Clover Systems logos included.
Not sure how the store holder got hold of em' (he didn't have a clue what they were) but as soon as I saw them, my eye's lit up like Christmas Tree Lights. Only one track included, this is the last track the Divinyls ever released. Notes by AussieRock with thanks for the rip.
Posted by Deutros at 07:55