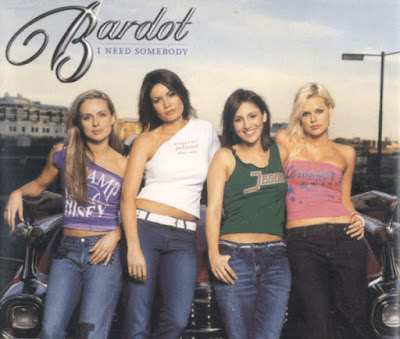 "I Need Somebody" is a pop–dance song by Australian pop group Bardot and was the second single from their second album Play It Like That (2001). It was produced by United Kingdom producer Ray Hedges.

"I Need Somebody" became Bardot's most successful single in Australia since their debut, "Poison", debuting at number 8 on the ARIA Charts (their second biggest debut) and eventually peaked at number 5. The single also peaked at number one on the ARIA Dance Chart, appealing to a wider dance audience with its various club mixes, and Bardot performed shows at nightclubs across the country. The success of the single confirmed the group's staying power and helped boost their credibility, earning them more respect from critics. "I Need Somebody" was the 59th highest selling single in Australia for 2001 and the 4th highest selling single by an Australian artist in that year.

Email ThisBlogThis!Share to TwitterShare to FacebookShare to Pinterest
Labels: Bardot