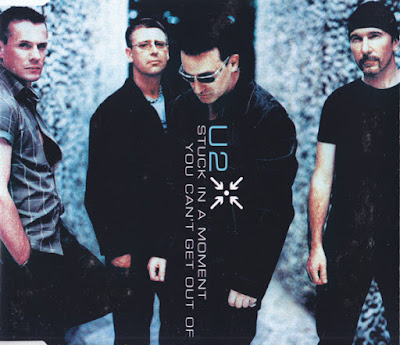 "Stuck in a Moment You Can't Get Out Of" is a song by Irish rock band U2. It is the second track on their tenth studio album, All That You Can't Leave Behind (2000), and was released as the album's second single on 29 January 2001. The band's lead vocalist Bono has said the song was inspired by a fictional conversation with his friend Michael Hutchence about suicide. The song peaked at number 52 on the US Billboard Hot 100 and topped the charts in Canada, their native Ireland and Italy, while reaching the top 10 in Australia, Denmark, Finland, the Netherlands, Norway, Scotland, Spain and the United Kingdom. In 2002, the song won the Grammy Award for Best Pop Performance by a Duo or Group with Vocal at the 44th Annual Grammy Awards ceremony.

01 Stuck In A Moment You Can't Get Out Of
02 Big Girls Are Best
03 Beautiful Day (Quincey And Sonance Remix)
04 Beautiful Day (The Perfecto Mix)
Posted by Deutros at 08:01