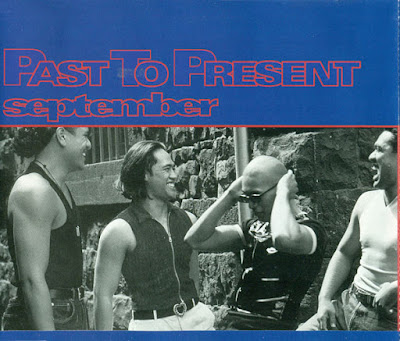 All four Past to Present members: Leighton Hema, Frank Laga'aia, Lennie Keller and his brother, Norman Keller, were born in New Zealand of Samoan heritage. They grew up together and attended the same church choir. Laga'aia's older brother, Jay, is an Australian-New Zealand actor and singer. The Keller brothers migrated to Melbourne in 1980. In 1991 the quartet formed there, after Hema and Laga'aia had also migrated, as a vocal harmony and dance group.

As Past to Present, they signed with Mushroom Records and issued their debut single, "Crazy" (June 1995), which reached the top 50 on both the ARIA Singles Chart and the New Zealand Singles Chart.  The track was co-written by the four band members  In the following month they issued an album, Four Noble Truths, which was produced by Ant Dale and Vince Deltito. In February 1996 they appeared on Peter Andre's cover version of Kool & the Gang's single, "Get Down on It", as featured vocalists. It peaked at No. 5 on the ARIA Singles Chart and No. 1 on the New Zealand Singles Chart. On the ARIA end of the year charts it peaked in the top 50. Their next single was a cover version of Earth, Wind & Fire's "September" (August 1996), which reached the ARIA Singles Top 50.

Email ThisBlogThis!Share to TwitterShare to FacebookShare to Pinterest
Labels: Past To Present