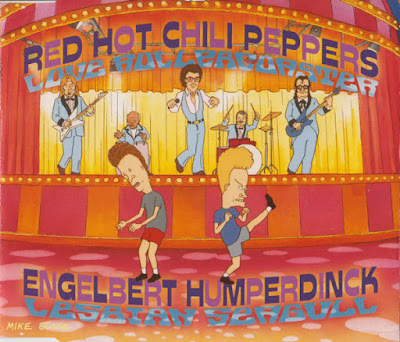 "Love Rollercoaster" was covered by the Red Hot Chili Peppers in 1996, recorded and produced by Sylvia Massy. This version includes original rap-based verses and additional lyrics provided by guest female backup singers, as well as the horn section being replaced with an approximation played on kazoos. The song appears on the soundtrack for the animated feature film Beavis and Butt-head Do America. An animated music video was made for the song, featuring Beavis, Butt-head, and the band riding an amusement park roller coaster, intercut with scenes from the film. The song is played early in the movie as well, when Beavis and Butt-head arrive in Las Vegas. In the dance hall scene, a fictional funk band is shown performing the song live (the one appearing on the single cover).

Although the song became a crossover hit, peaking at #40 on the Billboard Hot 100 Airplay chart and at #22 on the Mainstream Top 40 chart, it did not enter the top 10 on the Modern Rock Tracks chart (peaking at #14), let alone hit #1, and it failed to enter the Mainstream Rock Tracks chart. The band has never performed the song live. The single reached #19 in Australia and #35 in New Zealand.


"Lesbian Seagull" is a song originally recorded and released on the 1979 Tom Wilson Weinberg album, The Gay Name Game. It gained further fame when it was performed by Engelbert Humperdinck, which appeared on the soundtrack of the 1996 MTV/Paramount film Beavis and Butt-head Do America.
History. Mike Judge, creator-designer of Beavis and Butt-head, heard the song in a David Letterman "Dave's Record Collection" segment and contacted Weinberg about using it in the film, in which it is sung by Judge himself, as the voice of one of Beavis and Butt-head's teachers, David Van Driessen. Humperdinck's version, used in the end credits of the film and included on the soundtrack released on the Universal/Geffen Records label, was used as the B-side of Red Hot Chili Peppers's cover of the Ohio Players' "Love Rollercoaster", which was released as a single in its own right.